This whole-day conference discussed two major topics: 1) the implementation of the Law on Trade Unions: Achievements and challenges in rights empowerment, good workplace cooperation, investment environment, and employment relations stability; and 2) the ways forward for the Arbitration Council. 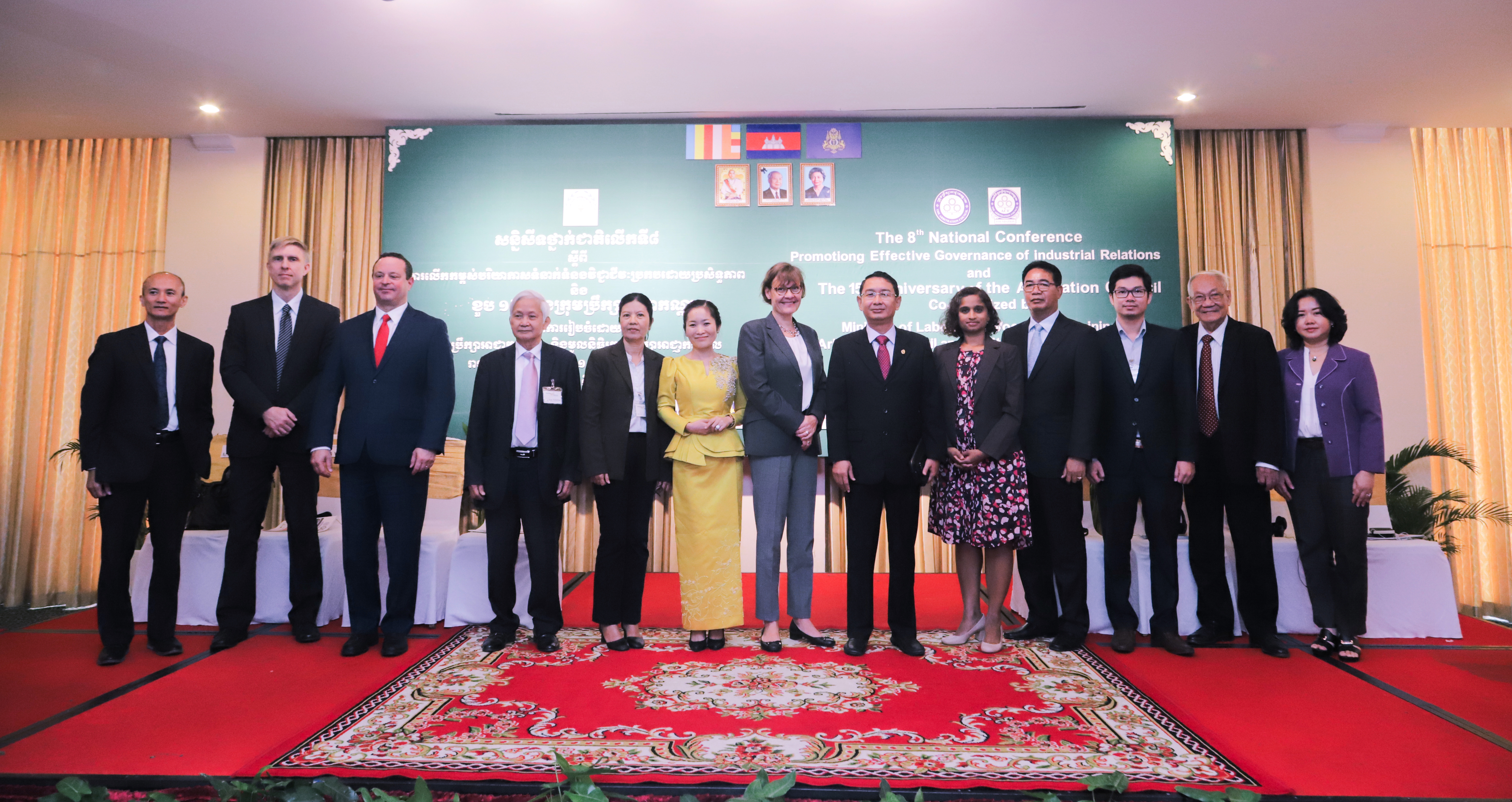 Furthermore, Ms. Maria SARGREN, Swedish Ambassador to Cambodia stated  that to talk about labour dispute resolution and industrial relations in Cambodia is not possible without mentioning the central role played by the Arbitration Council Foundation—a body that plays a critical role in this sector.  Likewise, Ms. Veena Reddy, Acting President of U.S. Agency for International Development (USAID) stated her support for the Arbitration Council in its on-going roles, which receive enormous support and trust from relevant stakeholders.

H.E. Mom Vannak, Secretary of State of the Ministry of Labour and Vocational Training firmly stated that the Law on Trade Union does not contradict international conventions of the International Labour Organization (ILO), noting that up to 2017, the Ministry registered 3793 local unions, 138 federations, 23 confederations, and 8 associations. He added that in the last fifteen years, the Arbitration Council has contributed to improved industrial relations and economic growth. The Arbitration Council is nationally and globally recognized in labour dispute resolution and gains credibility and appreciation. 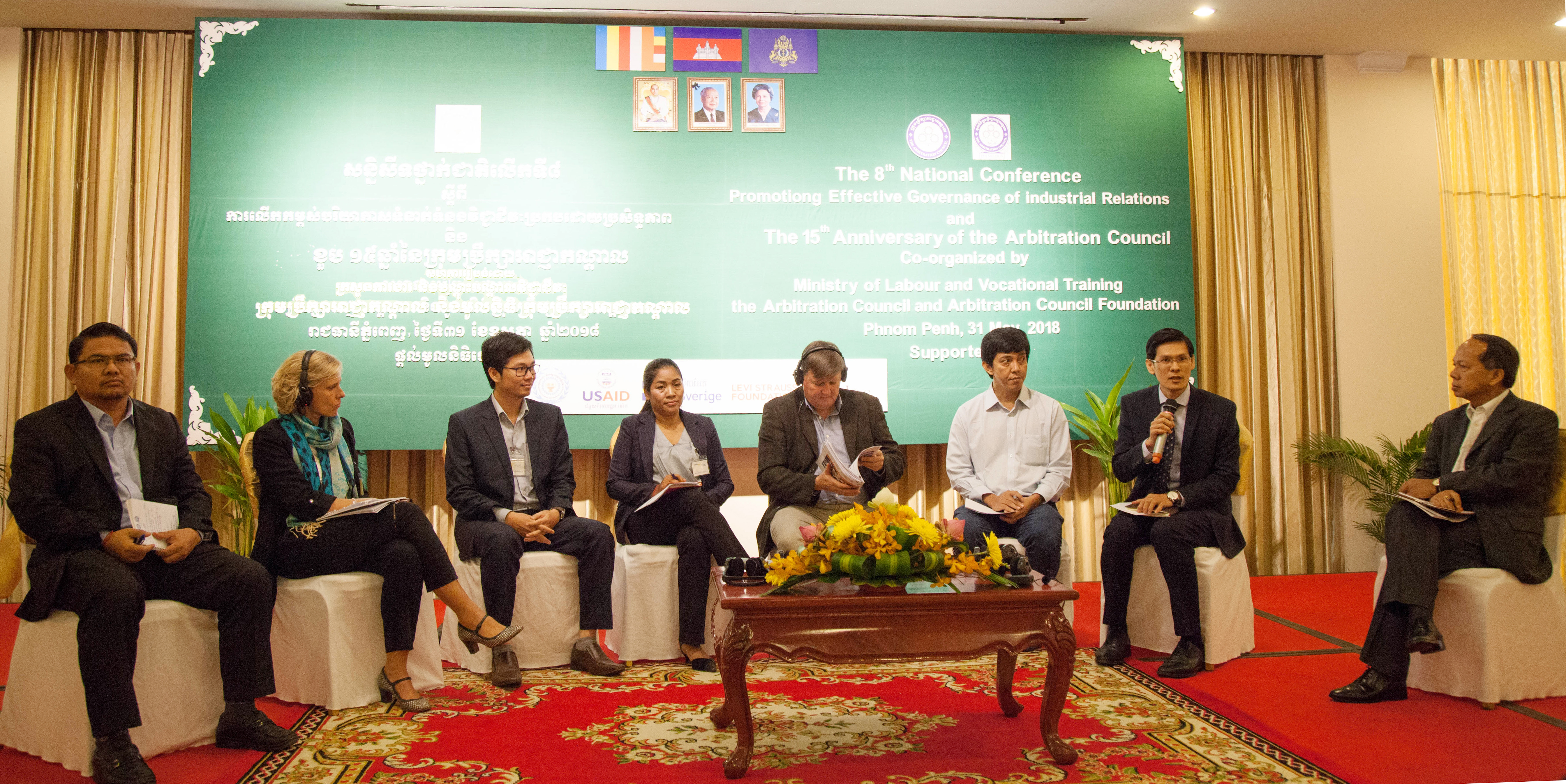 The first panel discussion session was joined by eight speakers who actively discussed the topic on the implementation of Trade Unions Law. The Ministry representative confirmed that the Law on Trade Unions does not contradict international conventions, adding that many local unions were registered upon the Trade Unions Law’ promulgation.  Moreover, both workers and employers understand the law, and they are more mature in the field, all of which caused the decline of collective labour dispute cases referred to the Arbitration Council. This was acknowledged by employer associations, the Cambodian Labour Union Federation, and the employer’s representative from Yak Jing garment factory. Nevertheless, the speaker from the Cambodian Confederation of Trade Unions argued that the numbers of registered local unions do not reflect the freedom of association.

The requirement for a union to have 30% of  the workers in an enterprise in order to represent workers to resolve collective disputes is not practical because workers who are not directly affected from the dispute should not be a party. Moreover, the law is a type of restriction on the rights of the plaintiff, who  may count on only the most representative status union, while the employer has more freedom to use its right of representation.

The Ministry representative responded, saying that labour disputes still occur. For the last several years, there have been 4000 cases annually, which involved both collective and individual disputes, referred to the MoLVT; notably, some collective disputes became individual disputes upon the adoption of the Trade Unions Law. This result was found by a study conducted by Nuppun Institute for Economic Research and was presented at the conference; they found that “disputing parties who could not access the Arbitration Council approached buyers or international organizations to put pressure on them, changed their collective disputes to individual disputes, conducted demonstrations, returned to negotiate with the employer, or held their cases without proceeding”. The finding was clarified by a speaker from ILO’s Better Factories Cambodia who pointed out that nine local unions at twelve companies, that were unable to bring their cases to the Arbitration Council, visited her office for assistance.

At the conclusion of the first panel discussion session, which indicated different ideas regarding the exercise of representative rights under the Trade Unions Law, it was proposed to have a consultative meeting with all relevant industrial relations stakeholders. 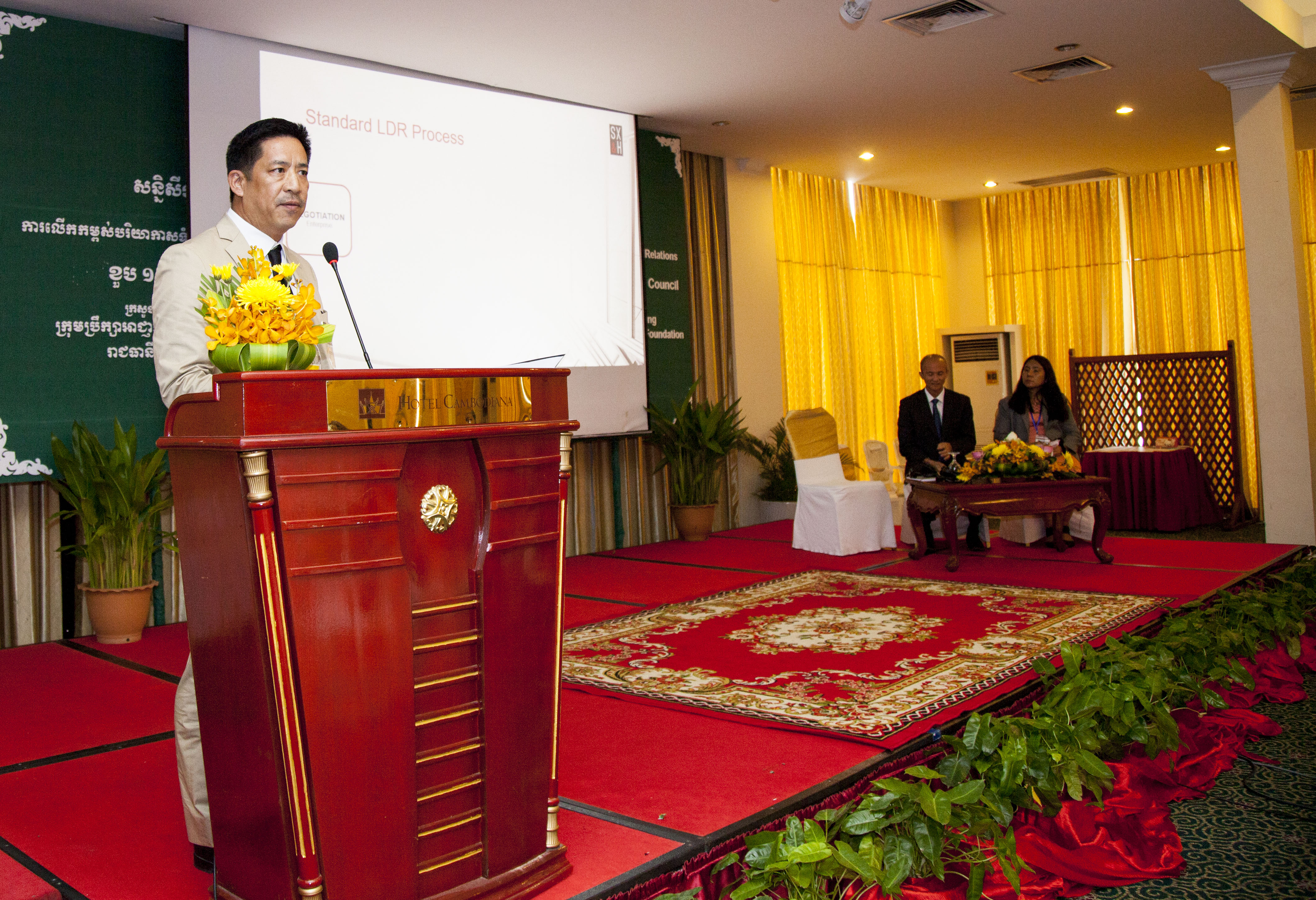 The second panel discussion session presented solutions responding to some challenges mentioned at the first session to ensure that disputes are resolved effectively in a timely fashion.  Mr. Hans HWANG presented the possibility of direct access to the Arbitration Council by agreement of the disputing parties to proceed directly to the Arbitration Council without first going through conciliation at the MoLVT.

The conference concluded that the AC can be sustain as long as it receives support from employer associations,  unions, and the government

through their financial contributions. Therefore, government regulations and a written tripartite agreement are needed. Because  establishment of the regulations and the said agreement will be time-consuming, in the short run, the ACF and AC must continue to depend on international development partners and foreign aid on a temporary basis.

This conference was made possible through the support of the Swedish International Development Cooperation Agency (SIDA), USAID, GAP Inc., and the Levi Strauss Foundation.

Share with :With the commitment  to excellence, continuation of  staff capacity development has been one of ACF’s key priorities.  . In order to strengthen the quality of our labour dispute resolution work and services, the …Read More>>>

Share with : Starting in 2017, the Training and Communication Department has innovated the idea of producing a Question and Answer Educational Video Series for the public, in order to assist people to have a …Read More>>>